The Benson train station is a three-sided tin shack about ten feet wide. Debbie and I stood there in the 2 am chill waiting for the Sunset Limited. It wasn’t the “City of New Orleans,” but that’s where it would take us. Suddenly, that lonely wail announcing a train. A light flooding the tracks.

Two conductors helped us board, chatted for a few minutes, and showed us to a seat. Although I was exhausted, I couldn’t sleep. I dozed fitfully until about 5 am and gave up.

Train! Smooth. Quiet. Far roomier than a plane. And I didn’t even have to ask for a pillow. I was given two – and needed them both. They were pancake thin, so I had to wad both of them up under my head for it to feel pillow-like.

Dawn. The desert stretched out ahead and a red-orange sky lay over the horizon. It was gorgeous, but that beautiful color was there because the sky was so smoke-filled. It’s perhaps the only benefit to the Wallow Fire up around Greer and Springerville. It roars through the White Mountains while the Horseshoe 2 continues to devour the Chiricahuuas.

As we’d  driven to Benson at 1am we’d been treated to an unusually beautiful night sky. A three quarter moon had hung low over the Huachucas. It was a rich, deep golden orange. Beautiful. Beautiful because of the smoke from the fire in Sonora.

Morning. We crossed the Rio Bravo and then stopped in El Paso where we stopped long enough to disembark and walk around a bit. Just after noon we stopped briefly in Alpine. Strange name, it seemed to me, for a town in the low Texas desert. It was hot and it was humid. As I stepped off the train, the conductor warned us not to stray because the stop would be brief. The woman across the aisle got off for a quick smoke and told me that on one of her trips a man walked a block to get a pack of cigarettes, and the train had pulled out without him.

On to the east. Big Bend country. This low desert reminded me of Cochise County: desert broom, prickly pear, yucca. Way too much mesquite. This part of Texas clearly didn’t get the severe freeze we did last winter. Prickly pear abounded though they were parched and wrinkled, begging for seasonal rains. We paralleled a two lane blacktop for miles and miles without seeing one car.

Past Langtry, home of Judge Roy Bean, and then over the Pecos River. The bridge over the Pecos is the highest railroad bridge  in the US. It’s 353 feet from the bridge to the river. Half an hour later we reached the area where the Pecos River and Rio Bravo merge and form Lake Amistad which separate Texas from Coahuila.

Immediately after the lake, the vegetation changed. the grass was actually green and we saw Lob lolly pine and a variety of deciduous trees. Finally, we stopped in Del Rio. In addition to a major Air Force base, Del Rio is now home to many seniors who live there for its proximity to low cost Mexican medicine. There are three large border crossings in and around the city.

The stop in Del Rio was billed as a “smoke stop.” However, it was far more than that. I got off the train to walk and immediately encountered three border patrol agents, one of whom had a dog. He and the dog boarded each car, the dog sniffing all the luggage. It was a drug search stop. The passengers’ permission was neither asked nor granted.

The agents went away empty handed.

It was like a fierce punch in the stomach. Only worse.
I hadn’t driven the road to Douglas in over three weeks, so I wasn’t expecting it. But today, I headed toward the College, and when I came out of the mountains, my eyes cut to the northeast, and there it was: the fire.
I know a fire has been raging in the Chiricahuas for about five weeks now. I see the pictures on the nightly news. Still, I was unprepared.
So it punched me, hard.
I screamed when I saw it. I screamed so much I had to pull over, and then I moaned. I moaned like a woman who had just found her child dead in the streets. I screamed and moaned until I had almost no voice left and my throat was raw.
Then I sat. Breathing, breathing. Eventually I could go on.
It’s a terrible thing to see a place you love dearly in the midst of disaster. My thought flew to people in the Midwest who have been watching their towns destroyed 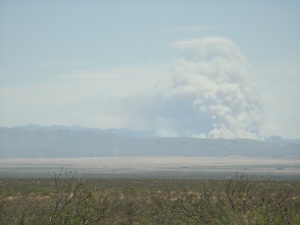 by tornadoes. In some way, I knew exactly how they felt.
No, the Chiricahuas aren’t my home. But I have been going to those mountains for nearly forty years. I have been in many of her canyons, wandered her streams, slept snugly in her valleys and hills. I’ve seen the trogon, the gray fox, and the coatimundi. I’ve picnicked, swum, hiked. I’ve taken students and visitors to see her beauty. I’ve lunched in the café in Portal and spent time in Paradise.
And now those places are burning up.
Firefighters have been there since shortly after the fire’s inception. It is human caused, though how it actually began is unknown. A cigarette tossed from a car window? A hot muffler on brittle, dry grass? Arson? Any of these could be the reason. Many locals, however, blame migrants for leaving a campfire when they fled the Border Patrol. This rumor remains, and it grows.
One resident is even quoted as saying, “To say that illegal aliens didn’t set the fire is like saying that Neil Armstrong didn’t walk on the moon.”
Set the fire. Not even started the fire. This man explained that in order to escape the Border Patrol, a group of migrants started the fire to distract their pursuers so they could run away. No matter there is no record of a chase, and no matter the Border Patrol didn’t report the fire.
All other recent fires  in Southern Arizona (seven major ones burning right now) have been started by US citizens. One was started by someone  out target shooting and another by US military training exercises. A third was started by a man who was welding.
At this point I am less concerned about how the fire started than I am how it will be put out. What matters is a place I love is being destroyed, more and more acres every day, every minute in fact. Over 80,000 acres have burned, and it’s only a few miles from the sweet community of Paradise. Residents have just been ordered evacuated.
Like the residents of Portal and Paradise, I could not bear it if these towns are destroyed.