Our trailer here at Islandia doesn’t have a water heater. Everything works just fine! said the woman when we bought the trailer. Liar, liar pants on fire. The list of things that didn’t work is endless. But back to the lack of hot water.

In summer – when it’s too hot to be here – the lack of hot water doesn’t matter. The water pipes are just a few inches under the sand, and the cold water makes for a perfect shower. But last fall when it had become cooler, showering become a project.

We use the bath house for our showers. No problem, except this was November and the hot water hadn’t been turned on yet. I’d taken a shower three days previously and vowed I’d stay dirty if the hot water didn’t come on. That morning I begged Manny to turn it on, and he did so immediately. An hour later, I packed up my shower kit and strolled on over.

Turned on the hot water. Nothing. Waited. Nothing. Tried the other shower. Ditto. Tracked down Manny and he went in back to investigate. Suddenly, water! Just as suddenly, it stopped. No amount of fussing could get it to come on again.

So Manny the gallant opened up an unused guest room and offered me the shower there. I turned on the water and it came out at a steady one-gallon-a-minute stream and was warm. I could do it.

Stripped, jumped in the shower, wet my hair and shampooed it. Just as I began to rinse, and just as soapy water began to slide down my face, neck, and body, the water ceased. No cold, either.

So with suds in my eyes, I jumped out of the shower and turned on the hot water in the sink. Hooray! About one-and-a-half gallon flow!

In that shallow sink, it took awhile for me to thoroughly rinse my hair clean of suds, and just as I began to wonder how to rinse the rest of my body, the shower miraculously came back to life. I jumped back in and rinsed clean in a drizzle or warm. It felt like heaven.

Note to self: buy a water heater.

While I was in Kino the last time, I had the opportunity to learn how to make red chile sauce from a man who makes the best, hands down.

We made a double batch, first breaking the dried chile from its stem, running a finger around inside it to get rid of most of the seeds, and tossing the chile into a big pot. We must have prepped maybe thirty chiles.

Then, my friend filled the pot with water to rinse dust and such off the chiles, and this helped loosen more seeds. He dumped the water and then refilled the pot and put it on the stove. 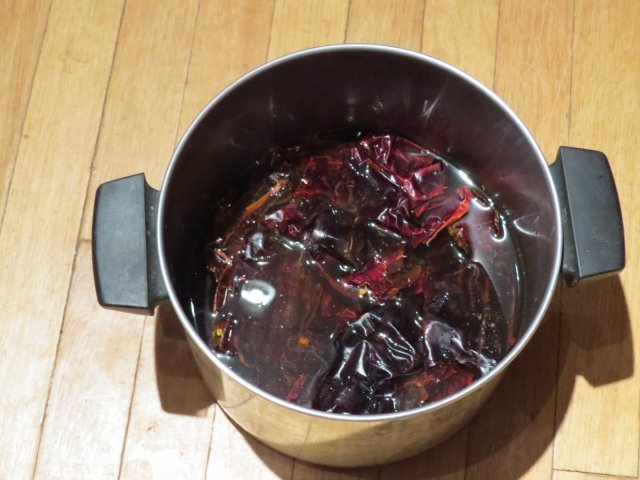 While waiting for the chiles to come to a boil, he chopped some pork – any cut, he says – into small cubes and sautéed the cubes in a healthy dose of olive oil.

He then pushed the cubes aside, tossed some flour into the oil, and made a gravy base. He cooked it a few minutes and turned off the burner.

When the chiles came to a boil, I pushed them down several times to make sure each one got well cooked. They cooked for maybe twenty minutes and plumped up just like a ripe chile, and they were soft.

Half the chiles and about half the liquid went into the blender along with a healthy portion of salt, dried cilantro and garlic powder.

He blended it up. Then he kept on blending. It turned from a sort of orange color to an incredibly beautiful shade of red.

He blended the batch for about five minutes, poured it over the pork cubes, and blended up the second batch.

And! The best part! I came home with nearly a quart of freshly made red chile sauce. And when it was gone, you can bet I made up another batch.

My batch, as photos show, was smaller. I made two, actually – one using beef instead of pork. I wanted to see if I could taste a big difference. The second batch I made was without meat. Instead of a meat gravy, I made a roux of flour and oil, cooked it, and then added the second batch of the cooked chiles.

With thanks to R.