When I visited Edisto Island, South Carolina, with my sister Jean and her family, one of my great hopes was to witness the hatching of baby turtles. I looked up the Edisto Island Loggerhead Turtle Project and found there was a presentation each Tuesday evening, so of course I had to attend. It was my second night on the island.

My sister joined me for the presentation. We learned that there were nests ready to hatch at several beach access points. The town of Edisto numbers each access road, and when we left the presentation, we knew to look near numbers twelve, ten and seven.

Two nights later, Jeannie suggested we go look for a hatching nest. We stopped first at number twelve and it was close to ready. The nest had already sunk, and we’d learned that the nests erupt a few days after sinking. We found a small group of people sitting around the nest, waiting, but they’d seen no activity yet.

Smoothing out the runway

Remember, because of beach erosion, mama turtles can’t get up high enough on the beach to lay their eggs and end up laying them where nests could wash away or where high tides would drown the babies. Therefore, Turtle Patrol Volunteers had relocated these nests, and when they did so, each nest was staked out and a sign was posted that told the date the eggs were laid and how many had been laid.

So when the nests erupted, it was easy to figure out how many remained, and on the night we visited, the volunteers said we should see about fifty emerge.

And emerge they did.

Before the babies began climbing out, my sister dashed back to the house and picked up a few of her children. They arrived on the beach just before the eruption.

I didn’t know at first that the little round balls of sand were actually baby turtle heads. And the little pieces of what appeared to be leaves were in fact little baby flippers.

See the little heads and flippers?

Then the round balls of sand moved. Flippers began to push sand away. And then … eruption!

No lights are allowed on the beach at night. Mama and baby turtles tend to head toward light. Usually, the sea is bright under moonlight, so mamas, and their babies sixty days later, simply head toward the light to get to the sea. Red lights can be used briefly, but even those can confuse the turtles if they stay on too long. 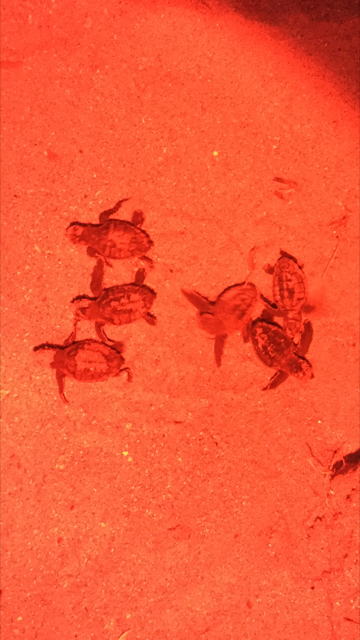 The only light was the flashlight of one volunteer. He turned on his flashlight a few feet away from the nest, standing toward the ocean. The babies scrambled toward it. 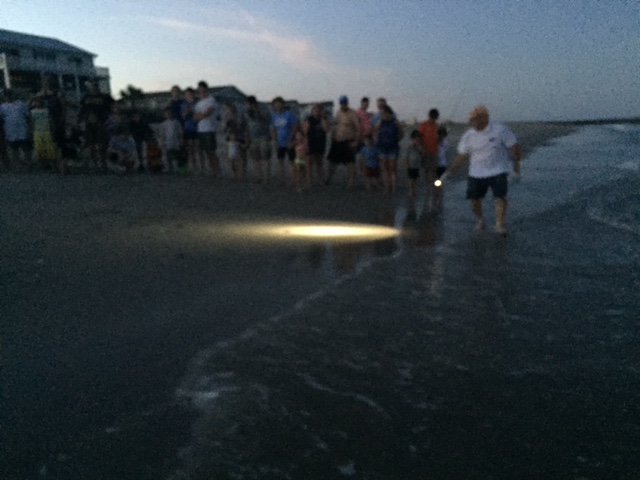 As babies erupted and headed toward the light, the man slowly backed down the hill to the sea. The babies continued following the light. Down the sand ramp the volunteers had made. Down, down, down to the ocean.

There was a group of about fifty who had assembled to watch the eruption. All were enthralled, even the smallest child. A cheer went up when the first baby turtle went into the water to begin his sixty-mile swim to the open sea where he and the others will climb atop some seaweed and follow the ocean currents.

Before the whole crowd had gathered

The males will never return, spending their entire lives in the ocean. Females will return to land, usually very near where they themselves hatched, to lay eggs. They are not sexually mature and able to lay eggs until they are over twenty years old. After that, they will lay eggs every two to three years, sometimes creating three or more nests along the shore where they were born.

Only one in a thousand baby loggerheads live to maturity. Of the fifty or so we saw emerge that night, will any make it?

Look at that tiny guy headed into the big, big ocean!