Raindrops on roses, and whiskers on kittens.
Yep, these things are pretty good. But more and more these days, my favorite things are in Bahia Kino.
First, of course, there is the sea. Always there. Where else could it go?

Shifting between blue and gray, from serene to angry. High tide slamming against the seawall or sometimes barely tickling it. But it is the sea that draws me here over and over again.
Then, food! I have a friend who has lived here for many years, and she has tired of the sameness of the food. There is not much real Mexican food other than seafoods prepared in Mexican styles.
Now, a part of me simply cannot imagine tiring of fresh seafood. Fresh as in right-off-the-boat seafood. A favorite memory is strolling the beach one morning, greeting a fisherman and asking about his catch. My friend and I were able to choose a fish and have it boned and filleted in front of us in a matter of minutes.
On the other hand, there are lots of foods I love that simply don’t exist here. Simple things like hearty wheat bread or cheddar cheese. Would I tire of the food if I were here full time? Yes, I imagine I would.
There’s also the estuary. It’s a ten- minute drive from my casita (that’s a fancy word for “old trailer in need of work.”) The estuary is filled with egrets, cormorants, and osprey in addition to pelicans, gulls and such. There is also, interestingly, a grounded police boat, though I’ve never been able to learn its story.

In early morning, right at the entrance to the estuary, fishermen shove their boats off, heading out to sea for a day’s work. There is a shrine to La Virgen, and recently a small open-air chapel has been added.

Just a mile away from the estuary’s entrance is an oyster farm and an open-air restaurant sits on the shore. I don’t know its real name, but the first time I saw it I dubbed it the Restaurant at the End of the Universe, as that’s just about how it feels there.
We sit at long picnic-style tables and benches, gaze out on the estuary, and get fresh shucked oysters in a matter of moments. It’s incredibly cheap to eat there. On a good day there’s enough fresh crab to have a crab-draped tostada and still be able to buy a kilo of crabmeat to take home.
Then there are the people. Kino has its share of odd folks like any place, but it also has some of the kindest, warmest folks I’ve ever known.
Last May I was here and got incredibly sick. I actually didn’t mind too much – it forced me to stay here a few extra days. One woman friend brought me more water and Imodium. Another gave me fresh squeezed orange juice, and another provided the proverbial chicken soup. In a small trailer park like the one I’m in, there are always folks who can lend a hand, and I treasure that.
Some of the folks here are incredible, from the woman in the office who can handle anything, to the two young men who maintain the grounds and jump in to help should I need something done.
There are several men who have worked on the trailer and space, one of whom is even known as a legendary organizer in the 70s. I love when he works here since he’s always singing softly as he swings his hammer or lays block.

Then there is my friend the restaurateur. This man owns one of the many open-air restaurants. I stop for coffee there each morning when I go on a walk with wome

n  friends. The day I met him – no, the moment I laid eyes on him – I simply adored him. He’s friendly, sweet, and a danged good cook. Now I shop up in “el Norte” for him. A sweater in winter. A pot big enough to hold three kilos of pinto beans. A large container of black pepper.
It’s funny. When I met this man, he was, immediately, a sort of father figure. Come to find out, I’m about a year older than he is. But knowing that somehow hasn’t changed that wonderful fatherly feeling I have for him.
There’s the woodcarver who drops by to try to sell his wares, but is just as glad for a glass of water and some conversation. As he leaves, it’s always, “Thanks, Mama.”
Oddly, I even enjoy finding dead fish and birds on the beach.
Last, or just about last anyway, is the moon. I never tire of seeing it rise over the sea and cast its silvery light across the water. The last two mornings, the moon has been just about full. My friend and I rose each day in time to sit outside with coffee, watching the moon turn to a shimmering gold, spilling its color across the sea. This morning was probably the most beautiful moonset I have ever witnessed. 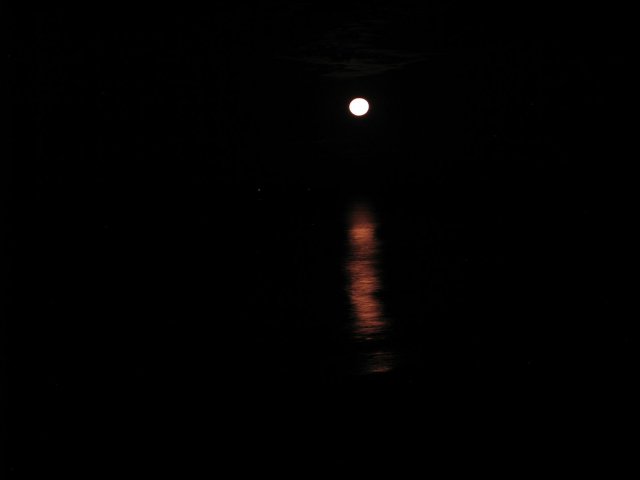 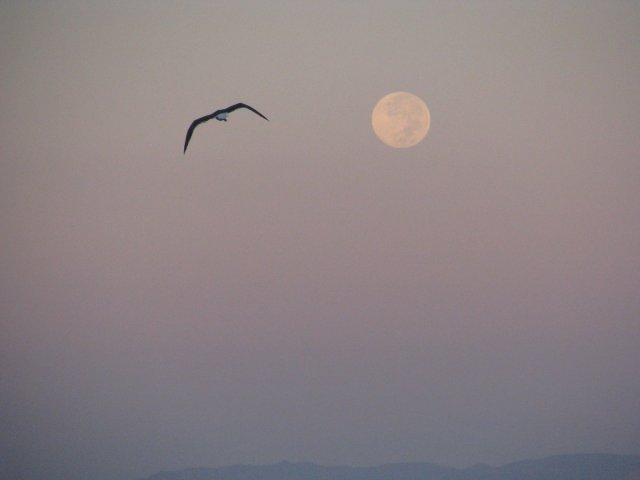 Sunrises. Sunsets. Gazing at Isla Alcatraz. Now I sit inside, in the air-conditioned comfort of the trailer, snugged into the cushioned banco. I lift my eyes, just a bit to the left, and there’s the sea.
I can never tire of this.