On Monday morning I was up before three a.m. InTucson to pack a few last minute items and get out the door before four.

It is odd getting to the airport in the dark, but it was so worth it to head out on this wonderful trip to South Carolina.

We got off the ground on time and went straight into the clouds so I couldn’t see a thing even though I had a window seat.

Soon we were in total cloud.

Part of the family was there to meet me in Charlotte, then off we went down two-lane roads to Edisto Island where the family had rented a house on the beach.

When I first read of this place, I pronounced it in my head as it would be pronounced in Spanish: eh- DED-stow. Wrong. It’s ED-iss-toe.

Most of the beach houses are big and likely very pricey. 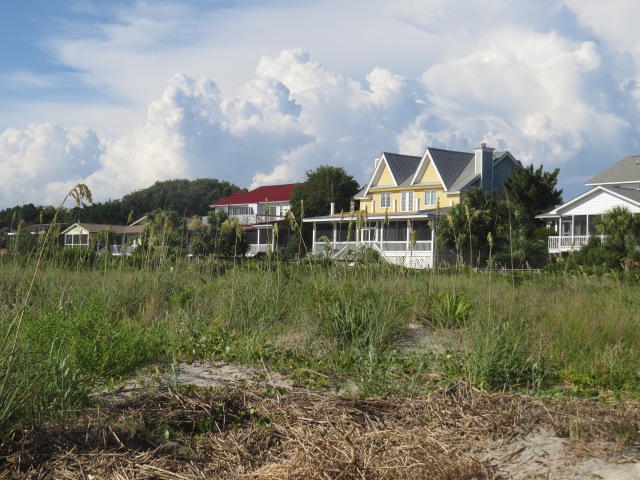 We have a smaller, older place that though it is a bit worn, is just perfect for us.

Complete with a simple outdoor shower.

I had my choice of places to sleep: I could have shared a room with four females ages five to thirty-three, or I could have the old porch, totally enclosed by windows, with a view of the beach. Hard choice, right?

And here’s our path to the beach.

The beach is a nice, gentle slope into deliciously warmish water.

Tomorrow, if the weather holds, we’re off to Savannah, Georgia, to wander that beautiful city for a while. But based on the clouds you can see over our neighbors’ houses, I am not counting on it.

Either way, I’ll be back with more photos soon.