Day three dawned gray and cool. Not ones to be put off by a little bad weather, we set off to Bath via back roads as recommended by Michael, our Couchsurf host.

But what is it about cemeteries? Both Barbara and I were drawn to one along the road. It had death dates in the early and mid 1800s. Although some had not died until they were in their seventies or eighties, many had died in their thirties, and quite a few were children or babies. The fragility of life two hundred years ago. 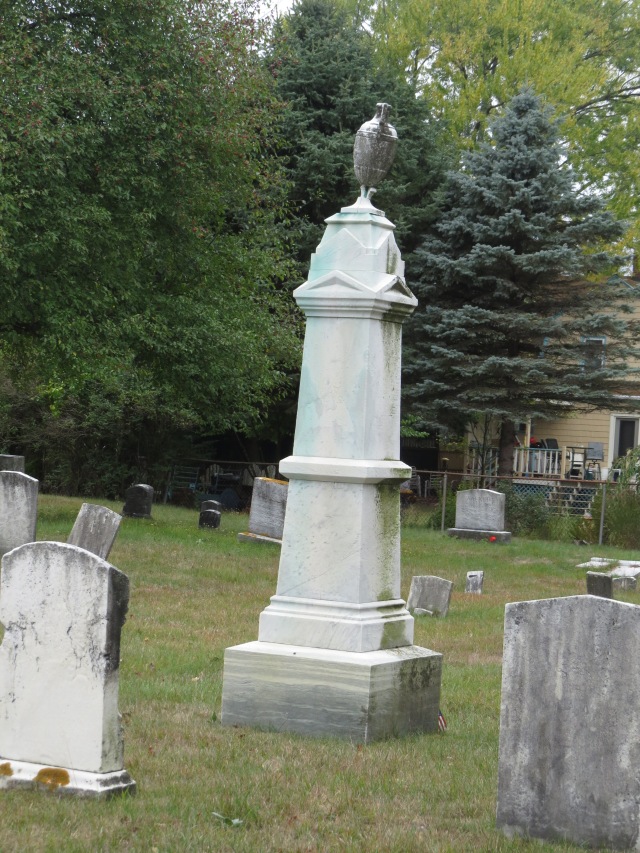 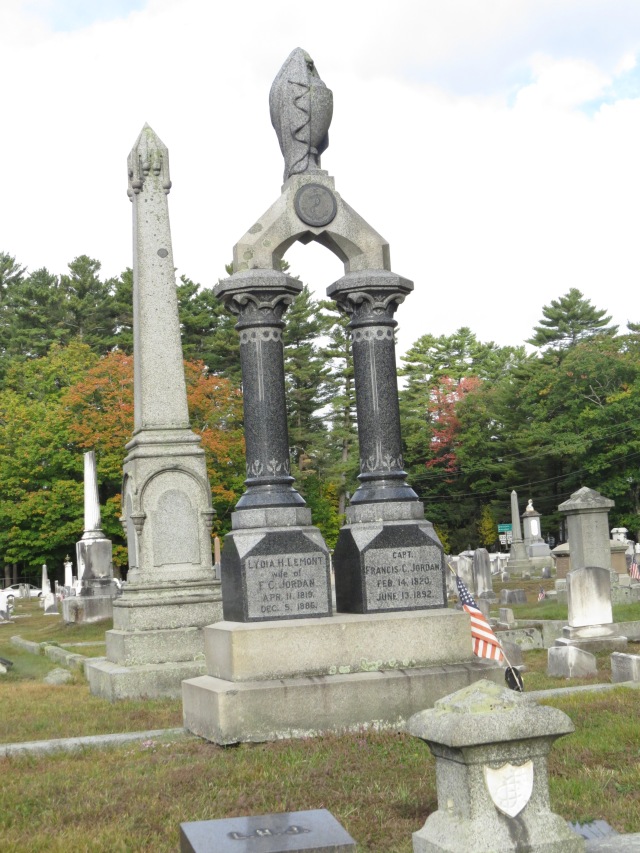 Bath is a sweet village on one of the many inlets along the coast. Michael told us that if the Maine coastline were stretched out into a straight line, it would be longer than the California coast. I looked it up, and yep. Maine’s coastline north to south is 228 miles long compared to California’s which is 840. But in a straight line, Maine beats California by about fifty miles, with a grand total of 3478 coastline miles. Compare that to its 228 mile length and that is a lot of inlets!

Bath has a major shipbuilding industry and there are also several small shops that build small wooden boats. 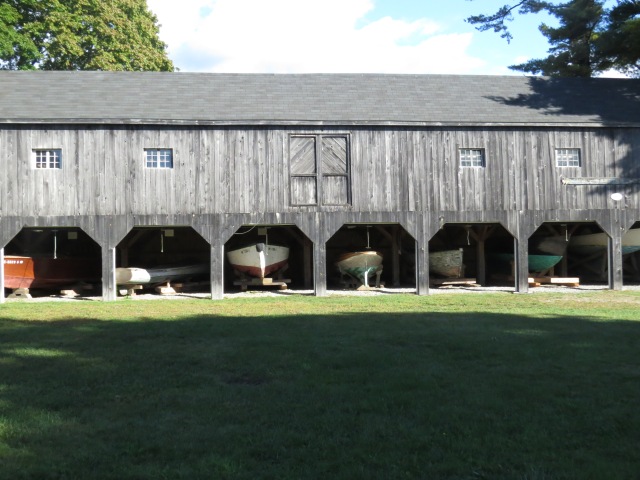 It has a very walkable downtown with an odd bookstore, interesting shops, antiques, and lots of warm clothing available. It also has one of the most beautiful libraries I’ve ever seen.

The library in Bath

Then we backtracked to Freeport where we met Michael and fellow Couchsurfer Rachel for lunch, and since we were in Freeport, the home of LL Bean, well, we just had to visit. And we ended up leaving dollars behind in exchange for some great clothes.

We settled back in at Michael’s house then left in the morning after a thousand thanks and goodbye hugs. Off we went back to Portland (back roads) where we picked up Kathy and headed out to roam the streets and go to Gilbert’s Chowder House. More chowder!

Now we we are three! 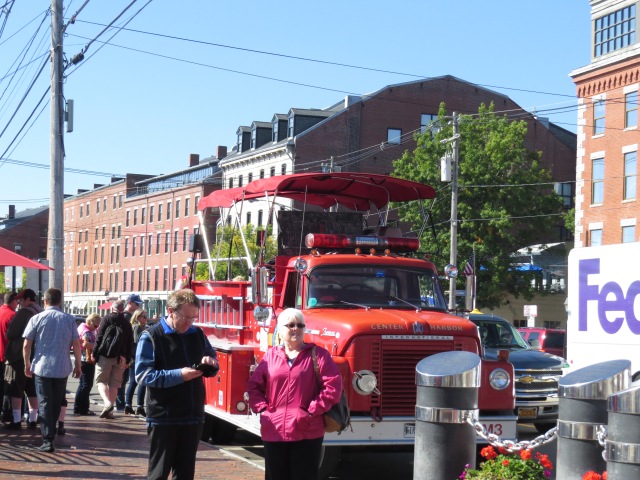 We did a bit of shopping and Barbara bought us a cigar to share. 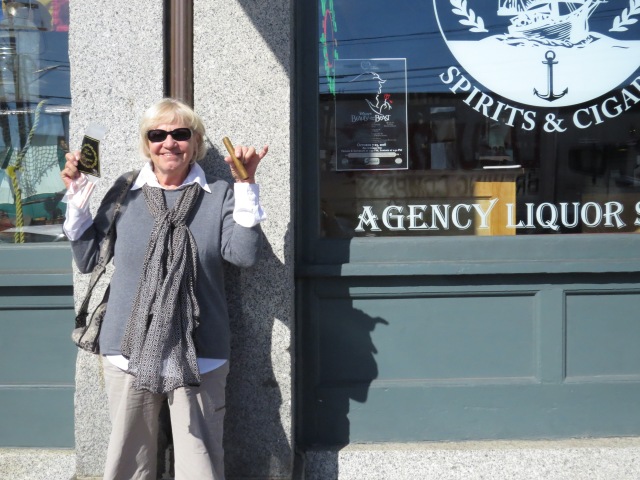 Then we noodled our way north to Rockland where we met up with Cousin Jill (actually, the wife of my cousin Bruce, but she is now my cousin too since she married him.)

We had a light dinner of salad and then … we boarded the schooner!

Because the sail wasn’t fully booked, we each ended up with a private room. After settling in, we wondered how in the world two people could comfortably share such a tiny space. The answer is simple: Don’t stay in the room. Head out on deck. 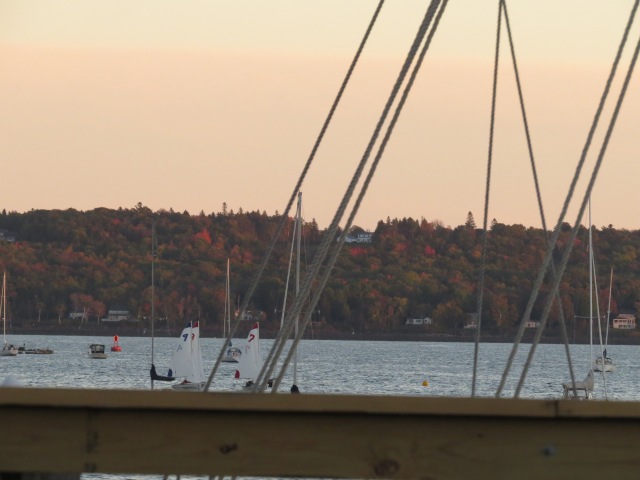 We learned our way around the schooner and learned basic important terms: port, starboard, galley and head.

None of us slept well that night. Too many people in a small space. We could hear each other enter or leave the head, heard some snoring from several directions, and even heard someone talking in her sleep. After that, earplugs ensured a sound sleep.

On Wednesday morning we had a hearty breakfast and then had a bit of time to roam town and pick up last minute items we may have forgotten. Kathy and I did a strange thing: We walked to McDonalds. But there was a good reason. Honest. I wanted to see if what I had heard was true. I’d been told that McDonalds in Maine served lobster rolls!

Yes, it was true, but sadly it was out of season so I couldn’t even see it on the menu. The young woman behind the counter told us to come back in the late spring. Oh, well.

Back to the schooner where we waved goodbye to anyone around, and off we sailed.