I got a message from my housemate, Debbie, while I was in Bahia Kino, Mexico, relaxing on the beach. The message totally unrelaxed me.

Don’t worry, it said. It is taken care of.

Just the beginning scared me.

We had an attempted break in last night. But Chloe chased him off! Nothing appears to be gone or even touched. She must have gone after him immediately.

When Debbie got up that morning and wandered into the kitchen for her coffee, she noticed a long slice in the screen of the sliding glass door. The door has a security door over it but I have never bothered to lock it figuring everyone would believe it was locked. The security door was ajar.

And Chloe was missing! Debbie had watched her go to bed. Later she closed the dog door and then headed to bed herself. So where was Chloe? Still chasing the perp? Who knows. Then Debbie went back to the kitchen, examined the screen, and dialed 9-1-1. When she called, she was told it would be an hour or so before anyone could come. Unfortunately, Debbie had to get ready to go to work, so she arranged for a deputy to come by in the evening.

As she left for work, Debbie saw Chloe across the road and got her back inside quickly with a dog treat. She opened the dog door and left the house in Chloe’s capable hands, er, paws.

Debbie arrived home and just before the deputy arrived, she noticed Chloe out across the street again. What the hell? How did she do that?

That evening, just a little after Chloe had again been rounded up, Deputy Morales came by. Debbie said he was exceptionally soft-spoken and sweet, just the type to be reassuring for a woman who was understandably concerned.

Any suspects? the kindly deputy asked. Debbie could think of none.

He talked with her awhile and in doing so found we occasionally forget to lock up the house. He was, appropriately for a law enforcement officer, horrified. He told her to check the doors each night and to buy some rods to drop into the tracks of the sliding door and all the sliding windows. He also discussed video surveillance.

As Debbie and Deputy Morales talked, Chloe kept nosing about and Debbie proclaimed how she was so proud of the dog for chasing off the would-be burglar. My pup earned a few more treats and scratches.

And then, the lightbulb moment. Debbie and the officer took a closer look at the screen. Not a slash, but sort of sliced up. And how did Chloe get out again that evening?

A short time later, a look around the yard showed the gate to the road had been dug at and dug at and the gate shoved and shoved. There was room for a thirty-five-pound dog to slide through.

Clearly, Chloe had gone to bed and while Debbie’s back was turned had gone back out again – right before the dog door was closed. When Debbie closed the dog door she’d inadvertently locked Chloe in the yard. Desperate to get back in to food and water (and her comfy bed, no doubt), Chloe had broken out of the yard and scratched at the window trying to get in or at least get Debbie’s attention.

Chloe hadn’t chased off a burglar at all. She’d merely been trying to get into the house for a good night’s sleep.

With a reminder to lock up and secure the sliding door and windows, Officer Friendly departed. Chloe, I’m sure, had a bit of a grin on her face for getting all those extra treats and scratches. 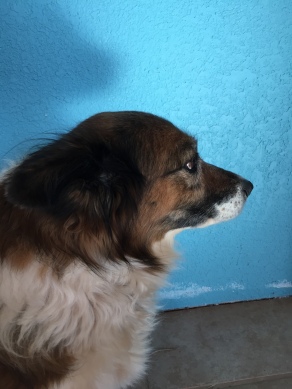 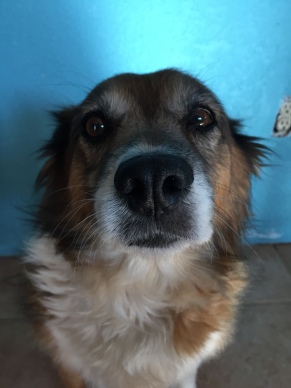