No, of course we didn’t stay there, but we had to pass through the eastern edges of Tucson to get to our destination, Mt. Lemmon, high atop the Catalina Mountains overlooking the city. The forecast predicted a high there of about 77 (25). We took off around seven and it was already hot. First stop: recycling. We hauled all the things Bisbee doesn’t recycle to one of the spots in Tucson.  A minute later we were off to the second stop: Beyond Bread.

We had initially figured we’d have lunch on the mountain, but there had been stories of crowds of people on Mt. Lemmon cooling off, and the ensuing long lines at the few restaurants. So we brought our picnic lunch.

Amazingly, we left Beyond Bread and didn’t head across the street to Trader Joe’s. That may have been a first.

As we headed up Houghton Road we talked about getting gas, but there was about a quarter of a tank left in the little Toyota Echo and we figured that would get us up and down the mountain easily.

Up we went, taking in all the scenery and views. Striated rock. Changing plant life, from mesquite and saguaro to tall, tall pines, fir, and spruce. Vistas that went on for a hundred miles.  It is like driving from northern Mexico to Canada in twenty-nine miles of steep, twisty road.

We passed campgrounds, trailheads, picnic areas, and overlooks. Some of the names were great. For example, there’s the Gordon Hirabayashi Recreation Site. But underneath the name it says “Prison Camp.”

Then there’s the Seven Cataracts Vista. How in the world did it get that name? My thought was cataracts on the eyes, as I’ve had surgery on both eyes now. But one friend reminded me that it can also mean rushing water, or waterfall. That made more sense, of course. But there were no falls on this dry, dry day.

Then there are the trails. The most interesting name I ran across was the Phoneline Trail.

Once we made it to the top, we got out and walked a bit, visited the one store where I purchased some fabulous fudge, and we even managed to hit a yard sale. Yes, I bought something.

We hopped in the car, ready to ride some of the side roads, do a little exploring. But then I glanced at the gas gauge. We were a hair away from empty.

Empty? But we’d had nearly a quarter tank and had only driven about thirty-five miles since I’d last checked! But the miles were all uphill, and we were carrying three adults. I guess steep hills and a full load make a big difference to a little four-cylinder car!

So. Plans changed. There is no gas station in Summerhaven, the little community atop Mt. Lemmon. Why wasn’t there anyone like the guy I saw in the Baja, the guy on a lonely stretch of highway who had a 55 gallon barrel full of gasoline to sell?

Instead of wandering all the side roads as planned, we decided to head downhill to a picnic spot. We stopped at the Loma Linda picnic grounds with views to the north side of the mountain. We had a lovely picnic and I experienced something I hadn’t felt in quite some time. I was chilly! What a treat! We ate slowly and hung out in the cool for an hour or so, then headed back down the mountain. 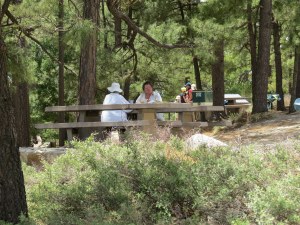 This is where I explain why there aren’t a lot more photos. Simply put, I didn’t want to stop and start the car too many times. The Get Gas! warning light was flashing. Seemed smarter to keep heading down the mountain.

Down General Hitchcock Highway. Out of the pines. Into the piñon. Back to the mesquite and saguaro. Back to the heat.

We made it to a gas station, thankfully. We’d been discussing whose AAA card to use. I, as the driver, was wondering where in the world I would pull off if we did, in fact, run out of gas.

When we got gas, we found there had still been approximately half a gallon left in the tank.

Had the gauge lied?

And what about the flashing red light that warns the driver of an impending empty tank disaster?

Apparently, both the gauge and the warning light had overreacted a little bit. We could have done the side roads.

Ah, well. Next time. We’re sure to have another hot day!

FOOTNOTE: A fire has begun overnight part way up Mt. Lemmon, near the Gordon Hirabayashi Recreation Site. Thankfully, this one will not destroy Summerhaven as the big one did in 2007.