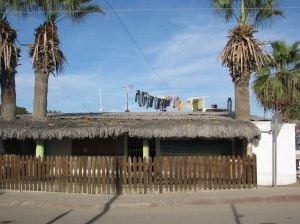 ok a long walk through Viejo today and only touched one small part of it. This town has fewer than 16,000 residents, and some of them live in Nuevo. Viejo is the original part, almost undeveloped to “first world” standards. And that is why I love it so.

The town is full of cement block buildings, a few old ramshackle stick-built ones, and an entire barrio of tarpaper shacks. Most of those shacks lie on undeveloped property, and if the shack owner installs water and lives there a certain amount of time, she or he can claim title to the land. Then the owner will often begin to build a real house.

Construction moves slowly, though. First, of course, there’s the problem of paying for construction. This is true everywhere but especially so in these incredibly poor neighborhoods. There’s another reason for slow construction: taxes. To my understanding, the property owner doesn’t have to pay taxes on a house or other building until it is completed. Completed, then, becomes a very vague term.

Many houses have a room with a missing wall. Or, it may have the walls but one room with no roof. Or there could be pillars towering above the structure indicating a second floor is coming. Of course, there may be no stairway to that one-day second floor, but the pillars tell the tax man to back off.

Because of lack of cash and tax laws, Kino Viejo is filled with unfinished houses. Many of the unfinished ones are fenced and have lovely gardens. And every one of them has a dog.

Dogs are ubiquitous in Mexico, but because I spend so much time here in Kino, this seems to be the dog capital of Mexico. Dogs in the gardens. Dogs wandering the street. Dogs sleeping under a car. Dogs roaming the beach. Dogs, dogs, dogs.

Most of the confined dogs will sit up and take notice when you walk by. Some will bark. But almost every one of those dozing on the streets take no notice of humans. Occasionally a dog will approach, but it’s rare.

Many Kino dogs are street dogs or beach dogs. They have no real home and depend on trash cans, beached fish, or the occasional softie gringo to help him out. Many are ill. They carry that lean and hungry look.

But walking the streets this morning was a delight. Everyone I passed tossed out a “buenos días” or an “hola” to me. Women in gardens looked up from their watering to wish me a good day. Men nodded and spoke, children laughed and waved.

I made a quick stop at the farmácia, stopped in the tattoo parlor to see if José was in town, and lingered over an iced coffee and chat with Edgar at the only gringo-oriented place in all of Viejo, La Hacienda, a motel and restaurant. On the way back I ran into Manny, one of the groundskeepers here. “Hola Emilie!” he shouted. “¿Cómo estás?” I gave him a hug though he was hot and sweaty. Kino Viejo is that kind of place.