The sea at Bahía de Kino is a study in contrast, from day to night, tranquil to irate, glistening to gloomy. Each day seems to begin the same – soft dawn and a quiet sea. But then, anything can happen. 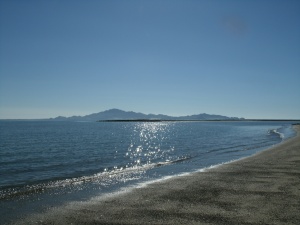 The occasional storm rolls in. Once a storm came across from the Baja. Dark terrifying clouds built, forming a monstrous wall, and moved steadily across the water. It was so terrorizing that locals fled.

In the fall of 2009, Hurricane Jimena hit San Carlos, less than one hundred miles to the south of Kino. Although the sea rose here, pouring over the seawalls, not a drop of water fell. In the aftermath, the beach was covered with a ten foot swath of shells, nearly a foot deep in some areas. As I walked the beach, I poked around to find shellfish that were still living and tossed them back into the water. From the other direction came a woman and her three young children. They were poking around and gathering the living shellfish.

The family was delighted that they were going to have a good dinner that night.  I, on the other hand, was enchanted, knowing I’d spend days doing the best shelling one can imagine.

Kino’s wind usually comes from the water. Humidity levels stay low, comfortable. Then overnight the humidity can rise so high that in the morning everything is damp, even wet. I rinse the salty dew from my car. But winds can come from the east, from the desert, dropping the humidity to single digits. Then temperatures soar until the wind shifts again, bringing the cooling ocean breezes.

Although dawn is generally clear and crisp, once I awoke to heavy fog. I couldn’t see a quarter mile down the beach, and even the streetlight-type lighting system here had its lights haloed in fog. I stood on the beach watching it change. Pieces of the pier surfaced; parts of houses came into view. The little island about a mile from shore, Isla Alcatraz, slowly emerged.