Today we thought it was supposed to be cool and rainy, so we’d sort of planned to stay in awhile and do a few things close to the house. Then, dawn. The sky was not overcast, so we went into overdrive. Ventura, home of Camino Real Park, is home to thousands of wintering monarchs.

Cinda bravely battled freeway traffic on The 5. Anyone who knows southern California knows this is one busy freeway, especially at rush hour. And we hit it at 6:45.

The 5 to the 405. Zip along. Come to a halt. Repeat. Finally beyond LA the traffic thinned a bit, then onto the 101 to Ventura.

We carefully followed the instructions to Camino Real Park and were surprised that it was located inside an old subdivision. A real neighborhood park, with trails, tennis courts, a snack shack.

What we didn’t see was a cloud of monarchs, even though the information we had said there could be around 20,000 of them.

We stopped a man out walking his dog and asked about the butterflies. He pointed to a small cluster of trees and assured us they were over there, but, he cautioned, the weather was so cool they may not be out.

We headed over to the trees. Not a monarch in sight.

Then, one of the pine tree’s cones moved. A needle swayed. The needle opened to orange and black.

I had been looking but not seeing. Watching but overlooking. The old ponderosa was covered in monarchs! 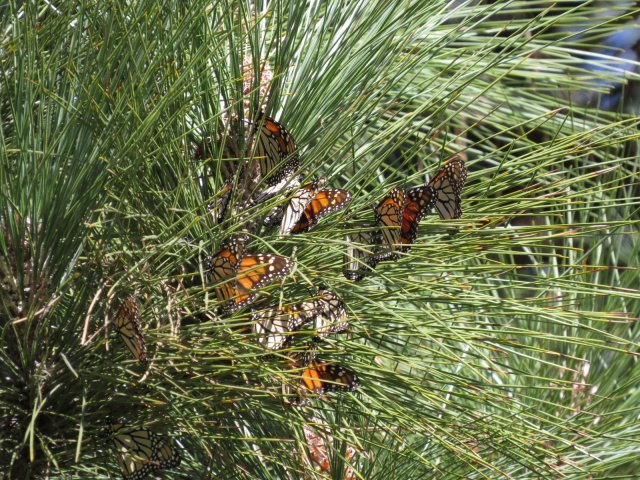 As I stood there the sun moved the temperature up just one tiny notch, enough to warm the butterflies enough to begin to move. 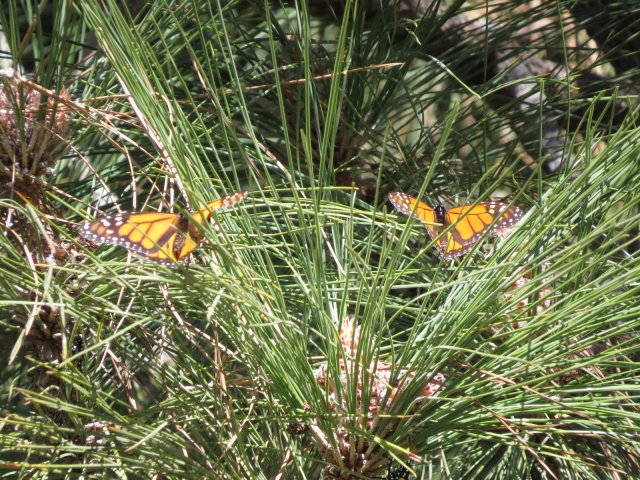 One floated across the grass to another tree. Another flitted from branch to branch. The ponderosa came alive.

Some were so high I could barely see them. None came to lower branches.

Then, the miraculous. Two on the ground. Engaging in monarch sex.

Monarchs often mate for an hour or more. Apparently these two didn’t mind my voyeurism. The continued their butterfly exhibitionism for about ten minutes after I noticed them, and suddenly they parted, fluttering off different directions. 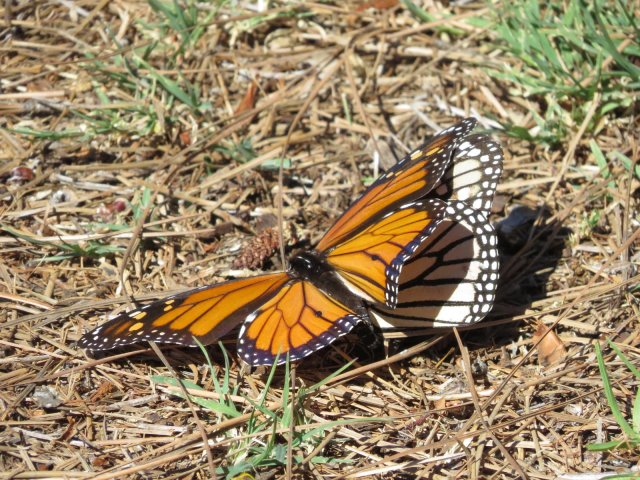 Afterwards we stopped in at a local Peet’s for coffee. Cinda remarked to the barista that the drive north had been a bit crazy, first speeding then stopping. “Yep,” she responded. “Out here on freeways it’s ninety or nothing.”

Ninety or nothing. We braved it all for monarchs.