Crystal Cove. The name alone evokes an image of tranquility and nourishment for the mind and soul.
I’d heard of this place for years from my friend Cinda. She used to live in Crystal Cove, a beach village where people owned the cottages, but a company owned the land.

As a child in the mid-1940s, Cinda and her family house-sat at one of the beach cottages. Within a few years, her grandmother had purchased one for the family to use. Cottage #6. From then on, Cinda spent all summer, every summer, at Crystal Cove.
After she married, she and her husband had the opportunity to live full time in the family cottage. His work took them away, but eventually it brought them back. And she lived there until 2001 when the state, which had purchased the land, evicted all residents. Not without a fight, but the end result was her home was gone.
The state created a new California State Park, called Crystal Cove, and rehabbed some of the cottages to use as rentals. Though Cinda had to leave her home, it is not – at least not yet – one of the cottages the state has chosen to rehab.

While in southern California, we had the opportunity to rent one of the beach cottages because a family had to cancel their reservation. And we were joined by two of her friends – one an old friend whose family beach cottage, Cottage #11, also sits empty and not rehabbed, and the other an old friend who was once Cinda’s roommate in Cottage #6.
The three women had been back to Crystal Cove, but none had found the opportunity to spend a night.

Years ago, when Cinda and her friends were there, the hill behind the cove was covered in grass and cattle rather than the McMansions of today. Then, the occasional deer could be seen on the beach. And once a bobcat was spotted.

We had one day and one night to be in Crystal Cove, the day and night just before the full moon. And although it had been somewhat cool, often overcast, and sometimes rainy for the eight days we’d spent in Mission Viejo, the morning of our visit to Crystal Cove dawned clear and bright.
And it only got better. Warm, breezy, sparkly clear. It could not have been more perfect.
We arrived early enough to have beach time and a great lunch in the beachside restaurant before we checked into our cottage. #18, up on the hill, overlooking the whole beach and cottages below. Including Cinda’s old cottage.
Crystal Cove. Wide open sea, and twenty-six miles straight out our door, Santa Catalina Island.

Crystal Cove. Tide pools with starfish clinging to the undersides of huge rocks.

Crystal Cove. Large rocks covered with mussels, and when the word is spoken aloud, gives a whole new meaning to the term “muscle beach.”

We had an afternoon of sun and beach. Time for shorts and tank tops. Scouring the sea for evidence of whales. Searching the water for dolphins. Laughing and talking. Looking at old photos. Me, feeling a bit like the interloper, listening to stories of old times on the beach.
All this was followed by an evening of sunset and wine. And more stories.
Cinda and I were up before dawn, sitting on the porch wrapped in sleeping bags and blankets. The silvery moon was a few hours shy of full and slowly turned to gold as it eased into the Pacific. 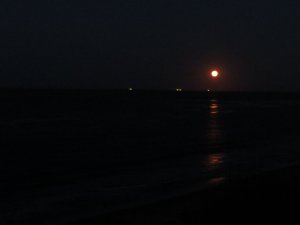 Crystal Cove lived up to its name, and to my hopes for it.