Well over one hundred people gathered at Central School Project (a cooperatively run art center) for Bisbee’s first civil union. It was almost legal.
When Bisbee passed the civil union law about two months ago, my friend Mark and his partner Hywel set the date: May 24th. Unfortunately, there were a few glitches that ran against state law, so a new civil union law had to be written and introduced. The new one will be passed at the City Council meeting on June 4.
But the date was set, and the couple plans to move to Vermont soon (where they can legally marry), so they went ahead with the celebration with their friends here in Bisbee.
The ceremony was held on the main floor in the broad hallway. There was live music before and during the ceremony and KBRP’s own Ryan Bruce as DJ for dance music afterwards. (KBRP is Bisbee’s low power community radio station, and Ryan is the director).

Ribbons and bows decorated the stairway newels, and there were simply scads of flowers.

The “before” music stopped, and the crowd silenced. The candles at the altar (nicely decorated folding tables). The woman officiating the service asked us to rise.

Down the stairs, one at a time, attendees and the two grooms came, and they proceeded slowly up the aisle. Three groomsmen and three groomswomen. A flower girl, and a flower boy.

Mark, his hair and eyebrows freshly blue (you’ve gotta know Mark) for the ceremony, walked in near the beginning, and Hywel came last, carrying a bouquet.

The ceremony was short and so very sweet.

The officiator spoke first and then Gene Connors, the man who proposed the civil union law, spoke. He read a piece of the law, after which everyone cheered, and then he read a poem. Everyone cheered again. Yes, there was cheering at this union.

Hywel spoke his vows. Mark couldn’t remember his – he was too nervous and excited. They then each repeated official vows and exchanged rings. The officiator then introduced the husbands and they hugged and kissed to clapping, cheering, and more than a few tears.

The recessional, with Mark and Hywel leaving last, was “The Rainbow Connection” originally sung by Kermit the Frog (again, you just gotta know Mark and Hywel). It was absolutely the right song for the ceremony, and the crowd joined in the singing.
Then, of course, the food (potluck), cutting of the cake, and the bouquet tossing. The first dance. 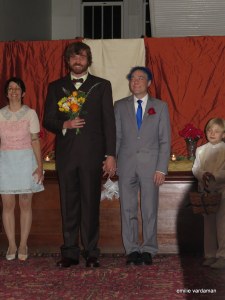 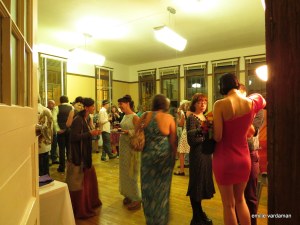 Part of what was wonderful to me was the number of children there. How beautiful that so many children were able to see love being celebrated, to join happily in that love, and to know that it is good and right to celebrate that love publicly. 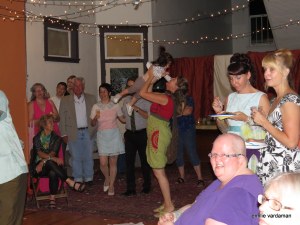